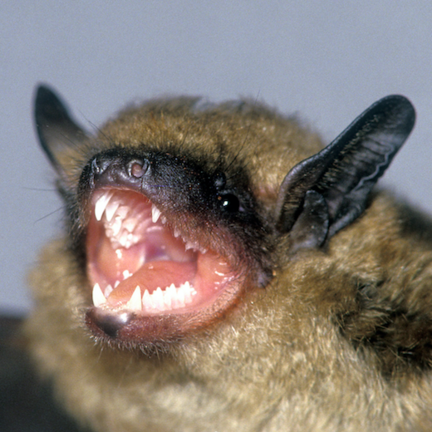 We've all experienced muffled hearing following a concert or a day of using power tools. Transient deafness after sustained loud noise, while annoying, is a fact of life for us and other animals.

Neuroscientist Andrea Simmons and colleagues from Brown University in Rhode Island, US, tested the hearing of big brown bats (Eptesicus fuscus) before and after an hour-long cacophony and found their hearing didn't deteriorate. In fact, after a day, their hearing seemed to improve.

Bats are some of the noisiest creatures. Big brown bats emit intense pulses as loud as 120 decibels – about as loud as a rock concert or a sandblaster – to navigate and locate prey.

Not only must they listen for the reflected sounds, which can return up to 80 decibels, but they must also contend with the din of the other bats flying in close proximity.

These "acoustically cluttered" conditions can reach levels of 140 decibels – comparable to being on the deck of an active aircraft carrier – for hours on end.

So to see if big brown bats lost any hearing sensitivity following such loud noises, Simmons and her crew captured seven wild specimens and measured their baseline hearing. They did this by training the animals in a soundproof room to choose out of two speakers, one of which emitted a sound. If they chose correctly, they received a mealworm treat.

Three (named Felix, Weezer and Boo) were then subjected to a loudspeaker blast spanning the entire hearing range of the bat for an hour. Two (Heisenberg and Dandelion) were taken to a different location and allowed to listen to an hour of ambient, but certainly not as loud, sounds.

Another bat, Mellie, did both loudspeaker and ambient tests on separate occasions.

Hearing tests were then conducted 20 minutes, two hours and 24 hours post-noise exposure. A bat was deemed to have hearing loos, or "temporary threshold shift", if the difference between the baseline and test scores was at least six decibels.

Unsurprisingly, the ambient noise bats, on averge, did not lose any significant hearing sensitivity. But neither did the bats who copped the noisy blast, and certainly none reached a six-decibel difference. After 24 hours, the noisy group appeared to have improved their hearing sensitivity by 1.7 decibels.

So while the study shows that bats seem to take loud noises in their stride, it doesn't explain how they do it – something Simmons and her team is working on at the moment.

"We hypothesise that the bat's inner ear may have some special adaptations that allow it to protect itself from loud noises," she says.

Figuring out the mechanisms behind bats' aural resilience is not just important for bat biology, but may provide inspiration to devices that better protect hearing for people in loud environments.

The work was published in the Journal of Experimental Biology.