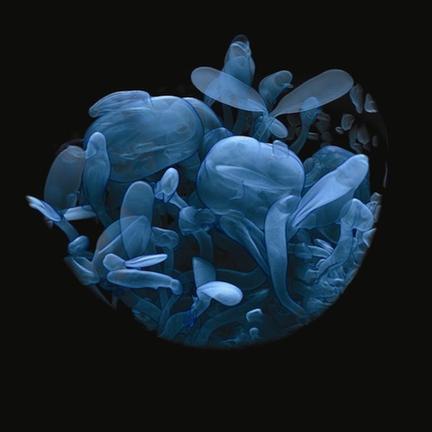 Art has given scientists something to think about in Erica Seccombe’s series Grow, in which the Canberra-based artist presents the transformation of seeds as they germinate and develop to first leaf stage, using micro-CT scanning and data visualisation technology to give a picture of what is going on inside and outside the growing plant.

Seccombe images “slices” of the seeds by rotating it in a 3-D microcomputed X-ray tomography machine. The data is then visualised using the open source Drishti software, with support from the Australian National University’s Department of Applied Mathematics.

“Both the interior and exterior of the virtual germinating seed can be observed simultaneously and from any angle, inside and out,” she told the broadcaster ABC.

The work has also caught the eye of scientists at the ANU’s Research School of Biology, who were baffled by a bubble that can be seen growing inside a mung bean as it develops.

“There’s a couple of interesting ideas that we’ve had about what they could be,” Adrienne Nicotra told the ABC. “It might shed light on some processes that are going on inside the seeds before the seed coat bursts.”

Her lead theory is that the bubbles are carbon dioxide that builds up inside the seeds as a result of germination and is held in by the seed casing. She suggests that pressure from the build-up could even help split open the seed.

Biophysicist Amit Singh, however, believes the bubbles are formed by liquid converting to gas as a result of pressure building as the embryo grows.

“This phenomenon has been reported elsewhere but this would be the first instance of it being seen in seeds,” Singh said.

“I think what’s really fascinating about the images is that they’re primarily art but they illustrate what might be some really interesting biological processes,” Nicotra said.