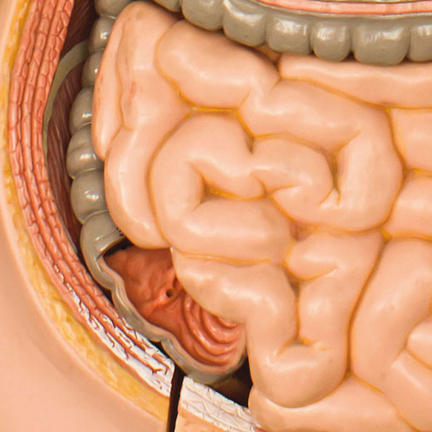 The outside-in concept isn’t too hard once you think about it. The intestines are a long tube from mouth to anus the insides of which are continuous with the outside world. Nothing in the bowel is truly inside the body till it crosses the intestinal lining (the mucosa). The main role of the intestine is to absorb nutrients but there’s much more than that going on. It is a formidable defence against the barbarians of the outside world. Just beneath the mucosa lining, immune cells work in formations so effective they would have put the 300 Spartans at Thermopylae to shame. They even share intelligence about possible invaders coming in through the bowel to alert the rest of the body. As part of that defence, the intestines also act as a communications hub with a repertoire of signalling molecules comparable to that of the brain.

When I was at medical school, most of the action in the gastrointestinal tract was in the upper reaches, the stomach, duodenum and small intestine. The colon and rectum – the large bowel – didn’t take much swotting at exam time. All that happened there, we thought, was the formation of poo and a bit of recycling of cholesterol. Oh, and cancer of course, which is very common there. We knew there were microorganisms in the large bowel but they were thought to be picking over our leftovers.

My how things have changed.

One of the hottest terms in biology these days is the microbiome – the vast population of bacteria and other largely harmless beasties which live in our large intestine. They are exquisitely adapted to a hostile environment and very hard to isolate and grow in the laboratory. So hard that scientists haven’t a clue what’s in there apart from the ones which are easiest to detect such as the lactobacilli. They’re what the probiotic industry markets to us, when in fact lactobacilli are only a tiny proportion of the menagerie inside – sorry – outside us. But even these minor players can be important. John Bienenstock of McMaster University in Canada has evidence suggesting that Lactobacillus rhamnosus reduces the stress levels of mice.

French studies have also shown that obese people have a diminished microbiome, which tends to normalise when those people lose weight.

Curiosity about the unseen millions living in our bowel led endocrinologist Oluf Pederson at the Institute of Metabolic Science in the University of Copenhagen to take a different approach. He and other groups take samples of faeces and sequence their DNA to identify the signatures of these microbes. Their findings suggest the total population of microbes – the microbiome – is playing an important role in metabolic diseases such as obesity and diabetes.

Pederson and his team took stool samples from 300 healthy Danes. They found that nearly one in four had an impoverished microbiome with 40% fewer bacterial genes in their faeces than the average. When this group was studied further it turned out that, while outwardly healthy, they tended to have fatter tummies and higher blood pressure and blood fats – all the hallmarks of a person in a pre-diabetic state. So the tantalising question is: does an impoverished microbiome drive the unhealthy pre-diabetic state, or is it the other way around. Does an unhealthy state diminish the microbiome?  Pederson’s work doesn’t answer that but there are fascinating hints from both human and mouse studies. A recent study at the Charles Perkins Centre at the University of Sydney found microbiome changes in mice who were on an unhealthy high protein, high fat diet. French studies have also shown that obese people have a diminished microbiome, which tends to normalise when those people lose weight and go on a healthy diet.

And there is a fascinating recent study of female twins, one of whom was obese and one was lean. When the faeces, replete with gut bacteria, of the lean twin were transplanted into germ-free mice, the mice stayed lean. On the other hand when mice got the faeces of the obese twin, the mice got fat. What could be happening is that the gut bacteria of lean people are not particularly efficient at harvesting energy from the intestinal contents whereas obese people may have a population that is highly efficient.

There have also been human studies in the Netherlands, which have performed faecal transplants from lean people directly into the duodenum of obese people through a tube. After six weeks they reversed the insulin resistance typical of the pre-diabetic and diabetic states.

The race is now on to try to identify the bacteria which induce metabolic health. They’re very likely to be ones we’ve never heard of and not currently in the bottles of probiotics on the pharmacy shelves. The other option I suppose is to share faeces with a thin person.

If that’s what it takes to live longer, no thanks. Beam me up now Scottie.