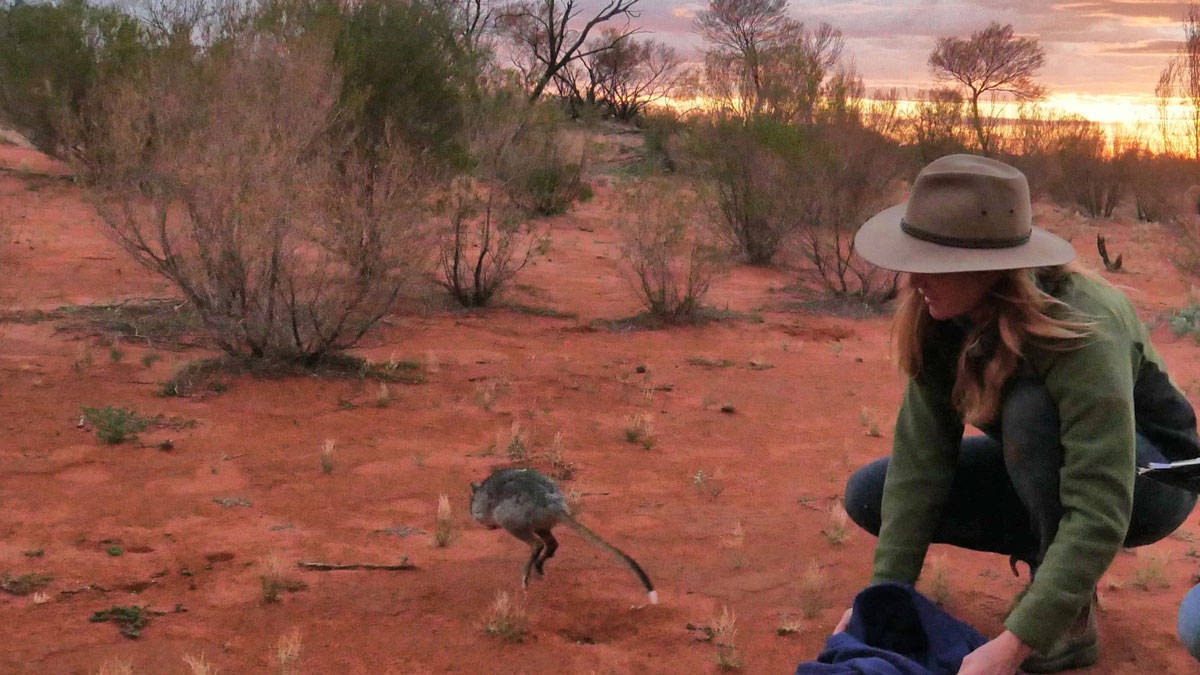 In a bold experiment in the desert of South Australia, threatened mammals are learning to evade predators.

Arid Recovery started in 1997, located near the Olympic Dam mine in Roxby Downs – we’re about six hours’ drive north of Adelaide. Introduced rabbits used to number up to 150 per square kilometre in this area, but when Rabbit Haemorrhagic Disease Virus was accidentally released in the mid 1990s, rabbit numbers fell by about 95%. My partner, John Read, was one of the scientists working for the mine, and we both wanted to build a permanent rabbit-free reserve and study how the vegetation regenerated after removal of this serious pest.

We saw an opportunity to also create a wildlife sanctuary by eradicating the cats and foxes and returning the locally extinct animals, particularly mammals. We secured some funding from Western Mining Corporation for a fenced reserve – it’s now owned by BHP, who still put in a majority of the funding. We also received funding from the government, and Adelaide University came on as a research partner. These days we’re also supported by a friends group of volunteers and we have a formal structure: we’re an independent not-for-profit with a board and advisory panel. We’ve also brought in a new partner in the last few years with Bush Heritage.

Fenced reserves are an important way to secure insurance populations of our most threatened species but ultimately our goal is for them to be redundant. Not because we’re likely to ever eradicate invasive species – that’s unrealistic. We’re working towards making a level of coexistence possible for some of our vulnerable native mammals by conducting research and testing different methods.

We’ve turned half the reserve over to experimental work looking at beyond-the-fence solutions. We’re researching ways to improve control of feral cats and foxes including the Felixer Grooming Traps (a passive poison delivery device that relies on cats grooming their fur and ingesting the poison) and Population Protecting Implants (toxic microchips that sit inert under the skin of native species and dissolve in a cat’s stomach if ingested).

We are also working on improving the responses of the native prey themselves. In what must seem like a crazy idea to some, we are putting cats back into some sections of the reserve along with bettongs and bilbies to accelerate the natural selection of those animals, so that they recognise cats as a threat and hopefully improve their survival.

Many of these native mammals were completely extirpated from the mainland. We’ve been able to repopulate our reserve with populations from remote islands where introduced predators were absent. However, isolation on islands together with an absence of co-evolution with cats and foxes means many of these animals have lost their ability to recognise and respond appropriately to predators. The idea is to actually expose them to real feral cats – not too many, just the right number – to stimulate learning and natural selection. Some animals that don’t learn may get eaten but those that do survive will reproduce, and natural selection should lead to populations with improved anti-predator traits. It’s about allowing that evolution to happen, to fast-track it in a safe environment where the population won’t go extinct.

In the six or so years that these experiments have been running we’ve recorded some exciting changes. They’re small wins, but they’re stepping stones towards co-existence.

For example, the burrowing bettongs that have lived with cats are now much more wary than their naïve counterparts – if you try to approach them they run away before you get close, whereas you can sometimes almost touch the others. And the survivors have slightly bigger feet and faster reaction times, which suggests a potential advantage during escape from predators.

Most excitingly, when we’ve released the bilbies that have lived with cats into a new area, and compared them to a group of bilbies that have never been exposed to cats, the cat-exposed bilbies had improved survival. This is risky science but without trying bold ideas our native species will continue to decline. We’ve made many attempts to re-establish these species outside the fence. Usually they fail and it’s confronting – you’re radiotracking a bilby and find the bilby ripped apart and eviscerated. However, we can’t rely totally on fences as they are merely postage stamps dotted across a vast continental envelope. They also exacerbate the issue of prey naivety and can lead to overpopulation and inbreeding.

While fences can stop cats and foxes, they’re not the ultimate solution. However, they do enable us to maintain insurance populations and conduct novel experiments to test new ways of returning our native species to the broader landscape. It’s a goal worth pursuing if we value our unique wildlife and want a healthy, sustainable ecosystem into the future.

Originally published by Cosmos as Fast-tracking the “super-bilby” Katherine Moseby is the principal scientist at the Arid Recovery Reserve, a predator-proof fenced reserve managing populations of threatened species, driving research to re-establish animals in the wild.