Home ■ History ■ Archaeology ■ When it comes to making a dagger, human bones are best 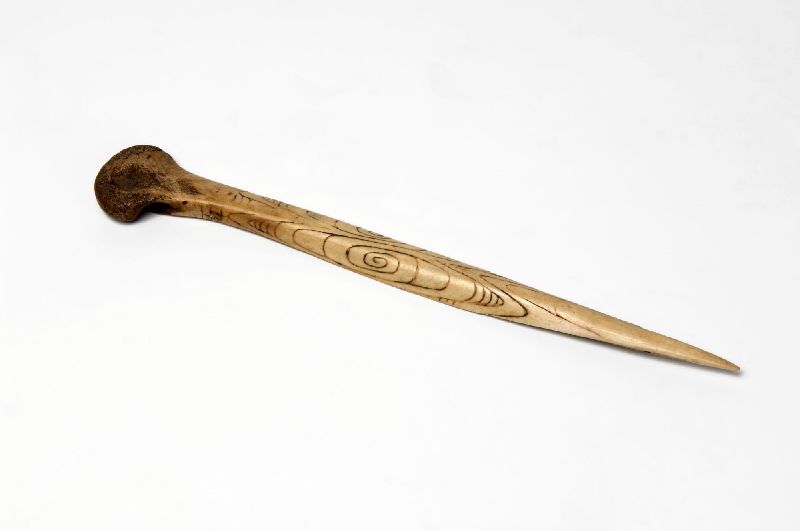 Daggers made from human femurs make better weapons and convey greater prestige than ones made from bird bones.

That’s the finding arising from an analysis of historical bone daggers, once widespread among male warriors in the Sepik region of Papua New Guinea (PNG). The analysis was conducted by a team led by anthropologist Nathaniel Dominy from Dartmouth College in the US, and published in the journal Royal Society Open Science.

To make their findings the researchers looked at the structural and decorative properties of 10 PNG bone daggers held in the Dartmouth College museum. The items dated from between the early and mid-twentieth century. A more recent bone dagger, dating from the 1970s, was purchased from an art dealer.

The 1970s artefact was fashioned from the thigh bone of a large flightless bird known as a cassowary (Casuarius unappendiculatus), as were five of the weapons in the museum collection. The rest were made from human femurs.

The researchers looked closely at the decorations on the surface of the weapons – which in the culture from which they came served dual ceremonial and offensive functions. {%recommended 6208%}

They also subjected them to computed tomography imaging to reveal their internal structures. This information was then used to estimate each dagger’s strength and mechanical resilience.

Historical records show that in combat the PNG warriors used the weapons to hit and penetrate vertebrae, hip, knee and ankle joints. Dominy and colleagues estimated that an attacking stab to these areas would sink about 20% of the blade into the wound, and based their modelling on this assumption.

The results showed that the human-made daggers had significantly better load-bearing properties than their bird-sourced equivalents. In part this was a result of inherent bone structure, but it was also because the human daggers had been better engineered, with more pronounced cross-sectional curvature giving them greater strength.

Human bone daggers, then, were superior weapons, and built to be so. The researchers interpret this result using an idea known as “signalling theory”, which holds that artefacts, over and above their practical value, broadcast status-establishing signals.

From this perspective, the human daggers were far more impressive than their equally lethal bird-bone counterparts.

They were, write the researchers, “potent objects of artistic expression” and “worn as conspicuous personal adornments”. They were also, they add, symbols of male fighting prowess, signalling both phsyical and supernatural strength.

There was also a third, rather more pragmatic, reason behind the tradition of consciously engineering human-bone daggers to be stronger those made from cassowary thighs.