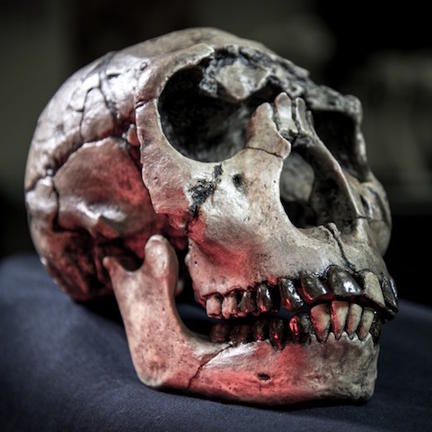 From the size of an isolated hominin tooth (in white), the sizes of the remaining primary teeth (in green) can be predicted. Illustrated here are the relative sizes predicted for the robust australopith 'Paranthropus boisei'. Credit: Alistair Evans, Matt Skinner, Kierstin Catlett and E. Susanne Daly

The size of whole row of teeth from our most ancient hominin ancestors can be gleaned from a single tooth, according to a study out today.

Alistair Evans from Melbourne’s Monash University and colleagues showed tooth size follows a simple pattern: a molar is the average size of those either side.

The rule, which was published in Nature, applies in modern humans all the way back seven million years, and puts to bed a couple of evolutionary controversies.

The discovery of the fossilised remains of a human ancestor is a huge cause for celebration – remember Homo naledi, a new species of hominin found in South African caves and described in September last year?

Much of a species’ development can be deciphered from its teeth. Unlike bones, teeth don’t change shape as they grow, or in response to breaks.

“When you pick up a tooth, you see the developmental process that happened, even if that was millions and millions of years ago,” Evans tells Cosmos.

As a layer of enamel is deposited daily, they can show what a child ate, for instance. And teeth size gives an indication of a species’ diet. Large, sturdy teeth are best suited to chewing plant matter or cracking nuts.

In a Nature News and Views article George Washington University anthropologist Aida Gómez-Robles writes: “Together with cranial features, dental traits are the bread and butter of hominin evolutionary studies.”

Unfortunately for paleaoanthropologists, pieces of “bread and butter” are few and far between. Rarely is a complete skull with a full set of chompers found. Teeth can scatter and be lost as the rest of the body decomposes or is eaten.

So Evans and colleagues collated tooth measurements from all known hominin specimens into an international database to see if they could spot patterns in tooth size.

The database included specs from some of the earliest hominins, Australopithecus, along with the more recent Homo species such as neanderthals (H. neanderthalis) and modern humans (H. sapiens).

And they saw a pattern. Each species followed a simple “inhibitory cascade” model, where the amount of pressure exerted on a tooth directly affected the size of the next. We know it happens in mice; it turns out it applies to permanent molars and “baby” premolars of our most distant relatives.

When they compared the teeth of Australopithecus specimens, which included Lucy (A. afarensis), to the later Homo species which popped up 2.5 million years ago, they also found a huge step down in tooth size, and slightly different proportion patterns between the two genera.

“This probably indicates selection pressure in early Homo that said, ‘you need to do something different’,” Evans says – adding weight to the idea that, unlike Australopithecus, they ate meat, cooked and used tools to help process food.

Their work also clears up the evolutionary placement of what is described as the earliest Homo species: H. habilis, or the “handy man”. Evans’ tooth analysis showed the handy man was probably not a Homo after all, and that he fits better with the Australopithecus mob.

So if the inhibitory cascade model is a default part of hominin evolution, can children grow giant molars if they start chewing tough foods?

“No – there’s no evidence that would happen,” Evans says, adding the pattern applies to species evolution rather than individuals.