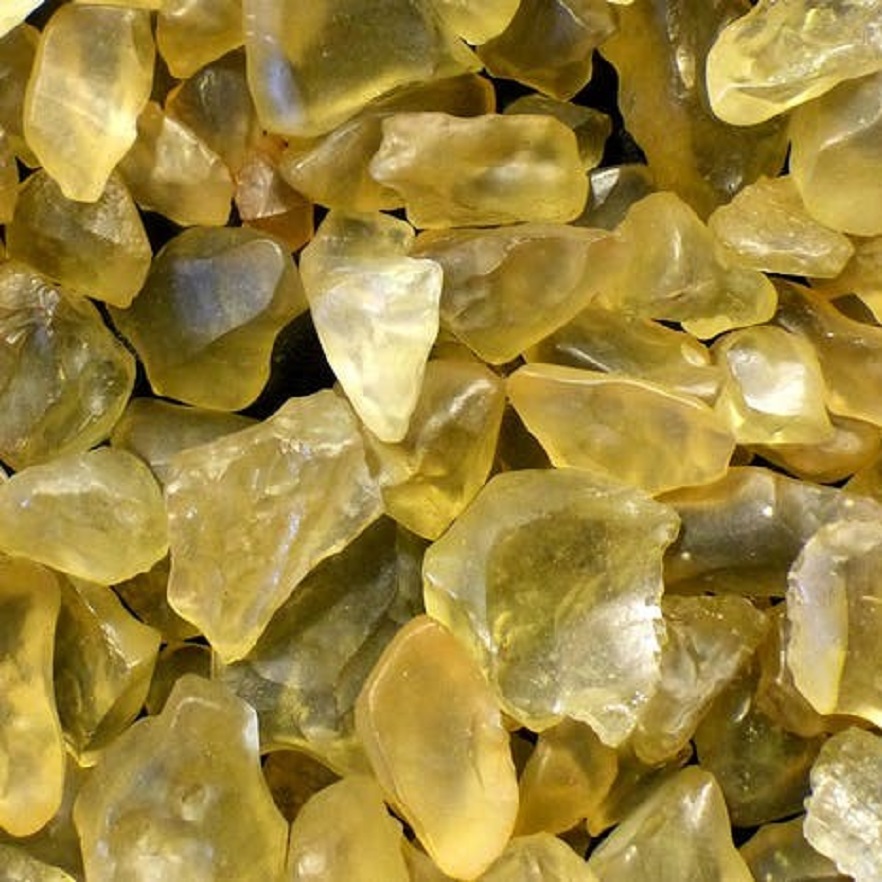 In the remote desert of western Egypt, near the Libyan border, lie clues to an ancient cosmic cataclysm. Libyan desert glass is the name given to fragments of canary-yellow glass found scattered over hundreds of kilometres, between giant shifting sand dunes.

Interest in Libyan desert glass goes back more than 3,000 years. Among items recovered from King Tut’s burial chamber is a gold and jewel-encrusted breastplate. In the centre sits a beautiful scarab beetle, carved from Libyan desert glass.

Libyan desert glass – raw and carved – is easily available today, but how the glass formed has long puzzled scientists.

Our research has found the answer.

The heat is on

Studies show the Libyan desert glass formed about 29 million years ago. The glass is nearly pure silica, which requires temperatures above 1,600℃ to form, and that is hotter than any igneous rock on Earth.

But few mineral relics survived from whatever caused the melting. Within the glass are rare occurrences of high-temperature minerals, including a form of quartz called cristobalite.

There are also grains of the mineral zircon, although most have reacted to form a higher-temperature mineral called zirconia.

Ideas about how the glass formed include melting during meteorite impact, or melting caused by an airburst from an asteroid or other object burning up high in Earth’s atmosphere.

Despite many studies, definitive proof about which origin is correct has been elusive, until now.

One problem is that no impact crater from any object hitting the ground in the area has been identified as the source of the glass. Another was the lack of evidence of damage from high-pressure shock waves caused by any impact.

Our research, published in the journal Geology, reports the first evidence of high-pressure damage, showing the glass formed during a meteorite impact.

Meteorite impacts and airbursts are both catastrophic events. Large meteorite impacts, such as the one that killed the dinosaurs more than 65 million years ago, are rare.

The Chelyabinsk airburst deposited 0.5 megatons of energy into the sky. Despite the damage, that event did not cause melting or shock damage.

In contrast, Libyan desert glass is thought by some to have been caused by a 100-megaton airburst, an event 200 times larger than the Russian airburst.

The airburst idea arose from modelling atmospheric nuclear explosions. Like a nuclear bomb, a large airburst deposits energy into the atmosphere that can melt surface materials. And an airburst does not leave a crater.

The new “smoking gun” for understanding the origin of the Libyan desert glass is evidence of an unusual mineral called reidite. Reidite only forms during a meteorite impact, when atoms in the mineral zircon are forced into a tighter arrangement.

Such high-pressure minerals are a hallmark of a meteorite impact, and do not form during airbursts.

Zircon is a common mineral in granite, sandstone and other rock types. It is known from Earth, the Moon, Mars, and various meteorites. It is widely used for dating when rocks formed.

Zircon is also useful when searching for evidence of shock deformation caused by a meteorite impact. At low shock intensity, zircon deforms by bending of the crystal. It is like bending a plastic spoon to the point where it deforms but does not break.

If the rocks then get hot, zircon will recrystallise. This results in the formation of a network of new, tiny interlocking grains. Above 1,700℃ zircon ultimately breaks down to zirconia.

Libyan desert glass contains many zircon grains, all smaller than the width of a human hair. While most reacted to zirconia due to the heat, about 10% preserve evidence of former reidite. But the thing is, reidite is no longer present.

Reidite is not stable when hot, and reverts back to zircon above 1,200℃. It only gets preserved if shocked rocks do not melt. So it takes a specialised technique called electron backscatter diffraction to nut out whether reidite once existed in shocked zircons that got hot.

The key to finding evidence of former reidite lies in analysing the crystal orientations of the tiny interlocking grains in reverted zircon.

Similar to turning a Rubik’s cube, the initial transformation to reidite occurs along specific directions in a zircon crystal. When reidite changes back to zircon, it leaves a fingerprint of its existence that can be detected through orientation analysis.

And we found the reidite fingerprint in samples of the Libyan desert glass. We examined zircon grains from seven samples and the critical crystal orientation evidence of former reidite was present in each sample.

Reidite is rare and only reported from meteorite impact sites. It is found in material ejected from craters and in shocked rocks at craters.

Prior studies have found evidence of former reidite within zircon from impact melt, similar to how it was identified in Libyan desert glass.

A 100 megaton airburst should occur every 10,000 years. If this size event is supposed to have caused Libyan desert glass to form, the geological record does not support the idea. The reidite fingerprint points to a meteor impact as the only option.

Outstanding mysteries about Libyan desert glass still remain, such as the location of the source crater, its size, and determining if it has eroded away.