Home ■ History ■ Archaeology ■ Dating the ancient past in tiny bites 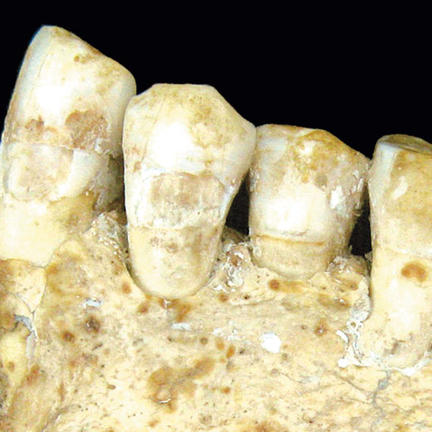 A tooth in this Neolithic jawbone contained tiny traces of a beeswax filling. Credit: PLOS one

A dusty old piece of ancient human jawbone, stored for more than a century in a museum in Trieste, Italy, has given a new glimpse into the lives of stone-age people who once inhabited the northern shores of the Mediterranean Sea.

One of the teeth still embedded in the 6,500-year-old jawbone had a deep, painful-looking crack in it. A recent analysis of that tooth – carried out in part at the Australian Nuclear Science and Technology Organisation (ANSTO) – suggests it had been carefully capped with beeswax to seal the crack.

The discovery is the oldest dental filling ever recorded and suggests our Neolithic ancestors were surprisingly adept dentists.

“This finding is perhaps the most ancient evidence of pre-historic dentistry in Europe,” says Federico Bernardini from the International Centre for Theoretical Physics in Trieste, one of the leaders of the study.

The jawbone was found in one of the region’s many caves, which Neolithic farmers used as animal stables. The jaw probably belonged to a male in his late 20s, judging by its size. The tooth’s severe wear was unlikely to be caused solely by eating, but “is probably also due to its use in non-alimentary activities, possibly such as weaving,” adds Claudio Tuniz, who co-led the work. The Italian team used carbon dating to establish the jawbone’s age. But to establish the provenance of the filling, they also wanted to carbon date the beeswax traces remaining in the crack. For that, they enlisted the help of Vladimir Levchenko and his colleagues at ANSTO. “We are one of the world leaders who work with ultra-small samples,” Levchenko explains.

Carbon dating works because carbon atoms come in three flavours: carbon-12 and carbon-13, which are stable isotopes; and carbon-14, which is radioactive, decaying with a half-life of about 5,730 years. Researchers can tell an object’s age by measuring the amount of carbon-14 left in a sample, using a mass spectrometer to count atoms with a mass of 14.

The challenge is that carbon-14 is a rare isotope, 10-15 times less abundant than carbon-12 in ancient samples. For tiny samples such as the beeswax filling, the results can be easily skewed.

Air is mostly nitrogen, which also has an atomic mass of 14, so any trace of air in the machine will affect the results. And certain atom combinations – a carbon-13 atom with one hydrogen attached, or a carbon-12 atom with two hydrogens on board – also weigh in at mass 14.

The first filtration step happens when a prepared beeswax sample is ionised to convert it into negatively charged particles.

The negative particles accelerate towards a positively charged terminal deep in the machine. Nitrogen doesn’t form negative ions, so is removed at source. Further filtration happens when the speeding particles are flung through an argon gas inside the accelerator, smashing any carbon-hydrogen clusters into their constituent atoms.  Using AMS, the ANSTO team established the beeswax was 6,645-6,440 years old, matching the 6,655-6,400 range the Italian team produced by carbon-dating the tooth.

Levchenko’s penchant for pushing ANSTO’s instruments to their limits began before he even joined the organisation.

“I was working at CSIRO, studying air bubbles trapped in Antarctic ice,” he recalls.

The team wanted to date this air by carbon dating the tiny quantity of CO2 trapped in the little bubbles. Until then, the smallest sample run at ANSTO had been about 100 micrograms – already well below the 500-microgram limit of most AMS machines.

“Ever since, ANSTO has kept working on it.”

Now one of the team, his work spans medical research – recently establishing, for example, that kidney stones grow surprisingly slowly, forming over years or even decades – to resolve archaeological questions such as the age of the Neolithic beeswax filling.

ANSTO is expanding its AMS capabilities as part of its new Centre for Accelerator Science, which will add two new accelerators to the two already operating.

“ANSTO will become one of the biggest AMS labs in the world,” Levchenko says.

This story was sponsored by ANSTO.