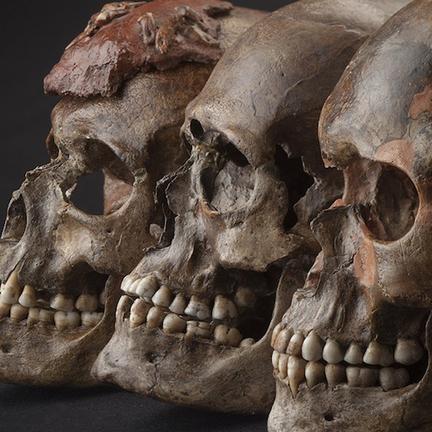 Three approximately 31,000-year-old skulls from Dolni Věstonice in the Czech Republic. For the next 5,000 years, all samples analysed in this study—whether from Belgium, the Czech Republic, Austria, or Italy—are closely related, reflecting a population expansion associated with the Gravettian archaeological culture. Credit: Martin Frouz and Jiří Svoboda

The fates of ice age human groups in Europe were closely linked to climate change, according to an unprecedented study of the genomes of 51 individuals who lived between 45,000 years ago (when modern humans arrived in Europe) and 7,000 years ago.

“We see multiple, huge movements of people displacing previous ones,” David Reich of the Harvard Medical School said. “During this first four-fifths of modern human history in Europe, history is just as complicated as it is during the last fifth that we know so much more about.”

Reich told the BBC that the 51 ancient individuals comprised “a pretty substantial fraction of the known human skeletons in this period.

“Because we’ve studied so many ancient humans from Europe from the beginning of the modern human occupation, we’re able to form a picture of how populations transformed over time.”

The study by Reich, Svante Paabo from the Max Planck Institute for Evolutionary Anthropology in Leipzig, Germany, and others was published in Nature.

It builds a clearer picture than ever before of the people inhabiting Europe during a sweep of 40,000 years of prehistory. That includes details such as skin and eye colour of the individuals (Ice Age Europeans had dark complexions and brown eyes), but also patterns of movement, migration and how different populations were related.

The study suggests that between 37,000 years ago and 14,000 years ago, different groups of Europeans were descended from a single founder population.

The DNA study shows that these founders, one of Europe’s most important Ice Age cultures known as the Aurignacian, were displaced between 34,000 and 26,000 years ago by a group of humans called the Gravettians.

Descendants of the founding population, however, can be spotted in south-west Europe towards the end of the Last Glacial Maximum around 19,000 years ago, and it is thought that these people went on to repopulate Europe after the vast ice sheets retreated.

Then, from 14,000 years ago, Europeans became more closely related to populations from the Middle East, the Caucasus and Turkey, probably as a result of migration during the first major warming event at the end of the Ice Age, Reich says.

It was from this time that blue eyes and paler skin seem to have spread throughout Europe, originating with immigrants from the Near East.